The Arts Engagement Committee brings art to PAS and PAS to art, promoting visual literacy through programming within our own community and beyond.

Arts Engagement events include curated tours and hands-on workshops at museums and galleries throughout NYC as well as programs at PAS. Our recent programs hint at what you can expect when you come along: 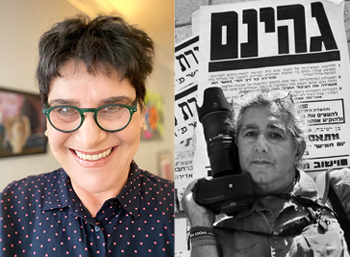 How do you see protest? This important question and many others will be addressed by noted social justice photographers Dorit Jordan Dotan and Lloyd Wolf, who have documented myriad protest movements in the US and Israel. Join the Arts Engagement Committee and moderator Jean Bloch Rosensaft as the photographers reflect on their experiences and share moving images from this highly relevant art form.

View the event on our calendar

Before the revitalization of the 87th Street building, the Arts Engagement Committee mounted exhibitions in the PAS Gallery on the mezzanine. Revisit some of those exhibitions below.

Created in the tradition of the great medieval Hebrew manuscripts and reflecting a 21st-century sensibility, Barbara Wolff’s illuminated texts are made with materials and techniques of the 14th century and with an awareness of the history, archeology, geography, and customs ancient Israel, where these words originated.

Each year students in our Zayin (Grade 7) class have the option of taking a photography elective. Combining arts and experiential education through the universal medium of photography, this class provides learners an entry point to Jewish study and skill development. The annual exhibition of their work is an opportunity for them to share their voice with others. In 2017, Zayin students discussed and illustrated important Jewish values through their photography.

Freedom Sunday: The Power of Protest

On December 6, 1987, an estimated crowd of 250,000 Jews and their supporters gathered at a march and rally on the Mall in Washington, DC to demonstrate their solidarity with Soviet Jewry. This massive undertaking was achieved through the hard work and cooperation of a broad-based coalition of Jewish organizations such as the National Conference on Soviet Jewry, the Greater New York Coalition on Soviet Jewry, UJA, and many others. The event, known as “Freedom Sunday,” took place on the eve of the first summit meeting in the US capital between Soviet leader Mikhail Gorbachev and President Ronald Reagan. It marked the apex of the movement to free Soviet Jewry. Shortly after this historic gathering, Soviet Jews received the right to leave and they flocked in large numbers to Israel, United States, and elsewhere.

The exhibition uses art, texts, and artifacts to commemorate the enormous contributions of members of our own community to bring about the success of Freedom Sunday. The exhibit also acknowledges the stories of Russian émigrés in our community who experienced first-hand the hardships of life as Jews in the Soviet Union and the challenges of starting new lives in the United States.

Listen to recordings from the Shapiro Audio Archive that supplement the texts in the exhibition.

Hadar Goldin (1991–2014) was a talented Israeli painter who expressed his love of art and of life until his last day on the battlefield. This inspirational exhibition was created in 2015 to share Hadar’s spirit, humor, and artistic talent and to honor his memory. Park Avenue Synagogue is pleased to bring the exhibition to the US for the first time.

The exhibition includes sketches, paintings, drawings, and photographs from Hadar’s early childhood, his art studies in England and Israel, and his personal work during his military service. As Hadar’s family notes, Hadar showed those who knew him how simple it is to love one another. He helped those in need and made it his mission in life to bring people together.

Among thousands of Israeli soldiers and reservists, Hadar Goldin served during Israel’s 2014 Operation Protective Edge against missile attacks from Hamas and a network of tunnels that reached underground from Gaza into Israeli territory. On August 1, just hours after a ceasefire had been declared, Hadar and two of his comrades were ambushed and killed in Gaza by terrorists coming out of an attack tunnel. Hadar’s body was taken into the tunnel and has never been returned to his family.

The Jewish Lens: Moments of Meaningful Jewish Learning
Annual exhibition of photography by the Zayin (Grade 7) class
May – August 2016

Zayin learners spent the year exploring photography and Jewish identity. They reflected on their Jewish learning from their early years until now, picked pivotal moments that made them feel most connected to Judaism, and then re-created those moments in photographs.

Park Avenue Synagogue has been partnering with The Jewish Lens since its inception in 2003. Combining arts and experiential education through the universal medium of photography, The Jewish Lens provides learners an entry point to Jewish study, skills development, and an opportunity to share their voice – their lens – with others.

Seeing Ourselves in the Other
Besa, A Code of Honor: Muslim Albanians Who Rescued Jews During the Holocaust

When post-World War II Europe found itself devastated by the loss of its Jewish population, Albania was the only country where there were more Jewish people than had lived there prior to the Holocaust. Over 2,000 Jews from Albania, Greece, Austria, and Italy were hidden in the homes of Albanian Muslim families throughout the War. Norman Gershman, an American photographer fascinated by these stories, traveled to Albania and Kosovo to chronicle the tales of the righteous Albanians and their devotion to Besa, an Albanian code of honor which means “to keep the promise.”

Each portrait is accompanied by a personal statement of the individual’s honorable act. Through subtle portraiture, Gershman communicates the honor, faith, and altruism of Albanian rescuers during the Holocaust.

As the world grapples with today’s crises, this exhibition invites us to find inspiration in seeing ourselves both as those seeking refuge and as those who have the power to grant it.

The Sound of Justice at Park Avenue Synagogue

Although the exhibition is no longer in the Gallery, you can still experience the words of Rabbi Judah Nadich and prominent guest speakers who addressed PAS with messages of commitment to social justice. This exhibition highlighted excerpts from the Rita and George M. Shapiro Audio Archive with illustrations from the PAS Archive, JTS, and other sources. These speeches, documents, and photographs demonstrate how our Jewish community responded to the civil rights movement and the momentous events it set in motion, up to the present. Let the words and deeds of the leaders who have inspired us in the past reinvigorate our dedication to make the world a better place for ourselves, our community, and our country.