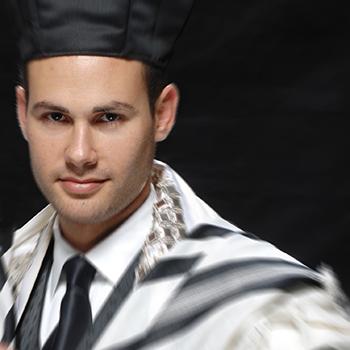 Cantor Azi Schwartz is a world-renowned vocal performer and recording artist whose music reaches both Jewish and interfaith audiences internationally. His craft of Jewish liturgical music has been described as emotionally moving, spiritually uplifting, and artistically dynamic.

Azi grew up in a traditional community in Israel. His grandfather, also a cantor, inspired Azi to pursue his passion and inclination for singing and music. After graduating from the Tel Aviv Cantorial Institute and studying under the top cantors in the world, Azi continued studying music, earning a Masters in Classical Singing and Conducting from Mannes School of Music in New York.

Passionate to bring Jewish liturgy to the broader world, Azi has performed at Carnegie Hall, the United Nations, Madison Square Garden, the US Capitol Rotunda, and the Israeli Knesset. In 2018, Azi was featured in a PBS special titled “The New York Cantors,” which brought cantorial music to millions of viewers across the US and in Europe. During Pope Francis’s visit to New York in October 2015, Cantor Schwartz represented the Jewish people at the multi-religious service at the National September 11 Memorial & Museum. He played the role of the cantor in Richard Gere's movie "Norman" and performs in concerts and interfaith missions around the world.

Azi has an astounding online following. He has released nine studio albums containing traditional and newly commissioned Jewish liturgical music. Dedicated to cultivating the next generation of cantors, Azi serves on faculty of all major cantorial schools, and serves as Treasurer for the Cantors’ Assembly, the largest professional organization for cantors.

Park Avenue Synagogue is honored to have Cantor Azi Schwartz, his wife Dr. Noa Schwartz, and their four children in our community.