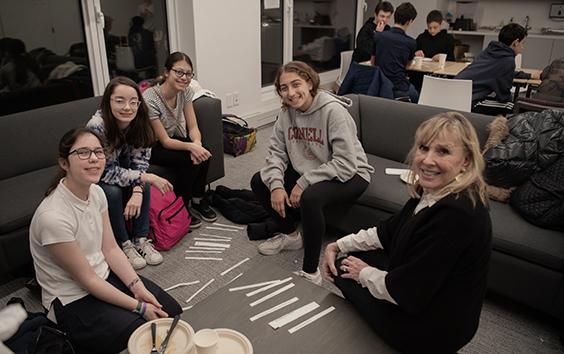 Pauline Zablow is devoted to sharing her love for the Jewish people and culture with the next generation and to enabling young Jews to own our sacred heritage.

Pauline’s first language was Yiddish, and Yiddish still shapes her thoughts. Growing up in Washington Heights and Brooklyn, she attended both Yeshiva Soloveichik and Rambam. From her parents, both Holocaust survivors, she absorbed the values of education, tzedakah, and hakhnasat orhim (welcoming guests).

Pauline believes in the Yiddish concept of “bashert,” whatever happens is meant to be. Her stories of how “bashert” has played out in her life include meeting her husband Milt; having two wonderful children, Shanna and Mark; Mark’s marrying his basherte Cory; and the birth of grandson Mason, the joy of her and Milt’s life.

Living in California when her children were young, Pauline volunteered as a shadow for students with special needs and served on the board of the Friendship Circle (a program which pairs teenage volunteers with children who have special needs). She also studied Torah weekly, spending thirteen years reading from the start of B’reishit to the giving of the Torah at Mount Sinai!

When Pauline and Milt moved back to NYC, she wanted to volunteer and to continue her studies. Friends told her, “take Melton,” which was only given at PAS. But another Melton 1 class wasn’t starting for a year and a half, so Pauline volunteered with seniors at another synagogue and continued her search for a synagogue to call “home.” Then, on the first day of Melton, Pauline met Rabbi Cosgrove, who also came from California, and they discovered that her daughter Shanna was good friends with the rabbi’s brother Jason. It was bashert!

Now a PAS member for eight years, Pauline volunteers with seventh graders in the Congregational School. She launched “Coffee Talk,” where students hear the stories of her parents and other Holocaust survivors. She wants the students to understand, to remember, and to retell these stories so they’re not forgotten as the last of the survivors reach the end of their lives. Pauline’s Bnei Mitzvah “Pen Ceremony” teaches students the difference between having fun and being happy – learning not what offers short-term amusement, but what nourishes their souls. She awards each a special gold pen as a reminder of those values.

Pauline shadows fourth graders with special needs and engages their classmates to befriend them, to become their pals. That was the forerunner of the Teen Food Pantry “PALs – Park Avenue Leaders” program, which enables all teens to participate in Food Pantry.

Pauline’s desire to be part of an inclusive Jewish community that offers values-based education to all ages has led her to serve as Co-chair of the PAS Membership Committee and to volunteer on the Inclusion Committee and the Education Committee. She also serves on the Advisory Council. She continues to study in Melton, Women in the Bible, Midtown Lunch & Learn, and many other classes.