What's your one word to describe Park Avenue Synagogue?

“[We] met with Rabbi Elliot Cosgrove immediately before the birth of [our] first son, and the wisdom and insight offered then and thereafter by the PAS clergy has been invaluable upon embarking on the most important journey of [our] lives.” Stephanie and Elliot, Young Couples Group Co-chairs Read more about the Berks 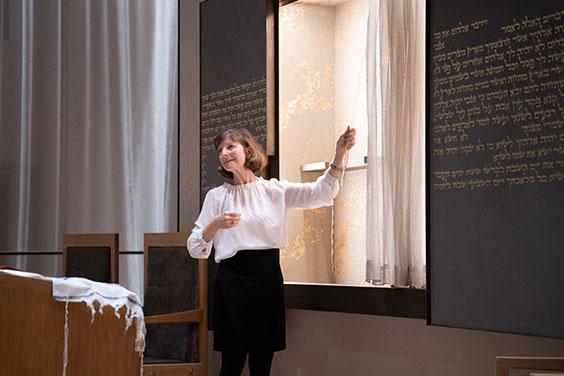 A Peek Behind the Curtain

In late January, Judaica artist Amy Reichert gave a tour of the 87th Street building and described her creative process to about 40 congregants, including Arts Engagement Committee co-chairs Judy Poss and Karen Smul. It was one “wow!” after another.

Karen’s highlight: In the Third Floor Chapel, the gold marks on the back of the bimah represent the Israelites journeying in the desert. At the Red Sea (on the right) there are few marks. Approaching the Ark – with the 10 Commandments on it, representing Sinai – there are more and more, signifying how the people grew in number and in strength during their 40 years of wandering.

Judy’s highlight: On the first floor, the arrangement of the Gottlieb windows replicates their positions in the original installation on the façade of the 1954 Steinberg House.