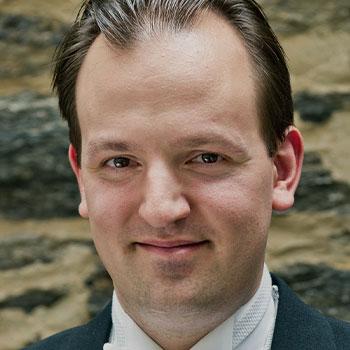 David Enlow is a “commanding” organist (The New Yorker), teacher, and conductor based in New York. He began work at PAS in 2012 and was appointed music director in 2020. Active in North America and Europe, Enlow was also hailed for his “immense virtuosity” by the Stuttgarter Zeitung and his “performances full of color, passion, invention, and power” by The American Record Guide.

His recordings on the Pro Organo label include Pater Seraphicus, the complete major organ works of César Franck; Piano à l’Orgue, an album of piano transcriptions; and Bach on Park Avenue, recorded on the Mander organ at the Church of St. Ignatius Loyola in New York. Enlow’s latest recording is an educational collaboration with Maestro Classics, Bach and the Pipe Organ, with materials for ages five and up. As a concerto soloist, Enlow has appeared with orchestras in works of Poulenc, Haydn, Handel, Respighi, Bach, and Saint-Saens.

He has also taught church music, improvisation, and organ repertoire classes for local, regional, and national events of the American Guild of Organists (AGO), the Royal Canadian College of Organists, and at the Juilliard School, from which he received two degrees. Enlow also received the Fellowship diploma, with both prizes for highest marks, from the AGO. This resulted in his joining the committee on professional certification, which sets the standards for national organist examinations and grades them. He then served two terms as Dean of the New York City Chapter AGO.

In national organ performance competitions, he received the first prizes of the Albert Schweitzer Organ Festival (USA) and the Arthur Poister Competition. He also recently served as a judge for several other contests, including the Schweitzer Festival and the AGO’s national improvisation competition. Enlow studied the organ with Paul Jacobs, John Weaver, and John Tuttle, and studied improvisation with Gerre Hancock.

Enlow’s work at the Church of the Resurrection on Manhattan’s Upper East Side, where he arrived in 2001 while still a student, has included directing performances of more than 50 different settings of the mass each year, sung by the church’s professional choir. The music program places special emphasis on the works of Mozart, Haydn, and their contemporaries. This is sometimes offered with chamber orchestra, but it also includes plainsong, Renaissance polyphony, Baroque music, and 20th-century works. For two years, the church offered choral evensong, featuring the 19th and 20th century cathedral repertory.

Enlow serves as Assistant Conductor and Repetiteur to the Clarion Choir and has appeared in almost all of New York’s major concert halls as an accompanist at the piano with choruses and solo singers, as well as in performances of chamber music. He is also organist of the Clarion Music Society and appears with various groups at the organ, harpsichord, and fortepiano.