Address by Arthur Penn
Chairman of the Board, Park Avenue Synagogue
Kol Nidrei 5777/2016

One of my favorite TV shows is Larry David's Curb Your Enthusiasm. In one episode Larry has a near death experience. During the incident, he prays to God . . . and lives. Believing that God saved him, Larry decides that he wants to go to synagogue for the High Holidays. He realizes that it is “a tough ticket to get.”

Larry asks his agent to make some phone calls, and even the agent can’t get tickets. In desperation, he buys tickets from a scalper who is standing outside the synagogue. The scalper guarantees that the seats are so good that “it’s the deal of a lifetime.”

As they approach the synagogue door with tickets in hand, Larry's wife says that she just doesn't understand why people have to buy tickets for synagogue. Larry replies that there are just "too many Jews to go around" during the holidays. Can you imagine that?

The famous poem “The Road Not Taken” by Robert Frost ends with this eloquent thought: “Two roads diverged in a wood, and I took the one less traveled by, and that has made all the difference.” During High Holiday time, many take the path to synagogue, the path which is more traveled. I know this to be true as I am giving this speech three times tonight in three different locations!

Paths define our lives. Paths that are presented to us and paths that we seek out. The journey of life is a stringing together of the paths we choose to take.

I always enjoy hearing the different paths our members have taken to Park Avenue Synagogue. Simhat Torah, the annual completion and beginning again of the Torah, is in a few weeks’ time. Our tradition at Park Avenue Synagogue is to honor two congregants for their long-time service to the community and give them the opportunity to tell their story.

We’ve had so many wonderful honorees over the years. For instance, Nadine Habousha Cohen met her husband Ed jogging along the East river about 34 years ago. She was raised Orthodox, he Reform. They found Park Avenue Synagogue comfortable for both of them and they’ve stayed engaged in our community. Nadine has taken on a variety of important leadership roles.

Shereen Rutman married into the Park Avenue Synagogue family when she married Howard, whose parents were already members. For over three decades Shereen has contributed to and enriched our community as a Board member and serving on many education committees, among other meaningful roles.

Mark and Rachael First, both Simhat Torah honorees, joined Park Avenue Synagogue because our community felt like the synagogue in which they both grew up. Mark learned from his parents that “giving back is just something you do." We thank him and Rachael for their significant contributions, including Rachael's service as an officer and as chair of many important committees, and Mark’s service to our Board, including co-chairing the Finance Committee among many other areas of involvement.

This year we will honor Suzanne Aisenberg and Lou Bernstein. I look forward to hearing their Jewish stories, their Park Avenue Synagogue stories, and their paths.

My family has its own story. Ilene and I joined Park Avenue Synagogue about 20 years ago, shortly after we had our first child. Ilene was raised in the Reform tradition and grew up in the suburbs of Philadelphia, while I was raised outside of Baltimore as a Conservative Jew. We were looking for a place where our children could get a Jewish education and we could be part of a Jewish community.

Between our three children, Madeline, Andrew, and Eliza, they were in every color room of the Early Childhood Center. Traveling with the synagogue to Israel with fellow Bnei Mitzvah families cemented longterm relationships with friends. Seeing our children read Torah during their Bnei Mitzvah, was a joyous and emotional moment for us. The power of that moment inspired me to become more active in the synagogue. I feel honored to serve such a vibrant, warm, and sacred community.

What these stories show us is that we all arrived to Park Avenue Synagogue on different paths. Once we get here, however, we again have to make a decision and choose what our next path will be. What path will we take within the synagogue community?

One option to take is the middle path; being actively engaged. Attending Friday night or Shabbat morning services. Getting to know other families. Using the synagogue as a means for your children to get a Jewish education. Choosing to be engaged with our adult education programs or traveling with the synagogue. Being philanthropic to the synagogue, allowing you to give back to the Jewish community. There are so many paths available which allow us all to be actively involved with Park Avenue Synagogue.

To keep our services, education, and programming as vibrant as they are, your annual support to our Kol Nidrei Appeal is critical. Synagogue dues represent only two-thirds of our expenses, excluding the schools. Last year we raised a record $2.8 million from over 1100 families. That was the broadest participation in our 134-year history. Thank you! This year, we would like to have 100 percent participation in our Kol Nidrei Appeal. Every single contribution counts and is important.

You can also take the path of leadership at Park Avenue Synagogue. A story in the Midrash tells of Nachshon, the head of the tribe of Judah. When the Israelites were trapped between the sea and Pharaoh’s army, Moses was praying to God for help. Nachshon decided to take action and waded into the sea. Not until the water reached his head did the sea part so that the Israelites could cross.

This past summer we established the Nachshon Leadership Circle. This circle recognizes our members who, like Nachshon, stepped forward to lead our community with a pledge to our once-in-a-generation Capital Campaign. Our Campaign is called “A Synagogue in Action: Building the Future.” I am thrilled to report that hundreds of families are part of the Nachshon Leadership Circle with gifts ranging from $180 to over $5 million.

We need to have vision and occasionally take calculated risks in order to enhance our destiny. With the dramatically increasing engagement of our members, our community has grown beyond its physical capacity. At Kol Nidrei just two years ago we outlined a vision for a new lifelong learning center on 89th Street and a revitalized 87th Street building that will together create a campus for prayer, learning, and community. This is why we have been pursuing our once-in-a-generation capital campaign.

For those of you who are part of the Nachshon Leadership Circle, please accept our heartfelt gratitude for your generosity. Your leadership is inspirational and we are thrilled to recognize you in the pamphlet on your seats tonight.

I'm reminded of a story: Murray is a religious man. One day a nearby river floods into town, forcing Murray to climb onto the top of his garage. A man in a boat comes along and tells Murray to get in. Murray says, “That’s extremely kind of you, but no thanks. God will take care of me.”

The water rises and now Murray has to climb on the roof of his house. Another man in a boat comes along and tells Murray to get in. Murray replies, “That’s extremely kind of you but no thanks. God will take care of me.”

He goes up to heaven and meets God. Murray says to God, “I thought you would take care of me. What happened?”

God replies, “Well, I sent you two boats and a helicopter. What else did you want me to do?”

While sometimes we’ve needed divine intervention to get us to this point of the building project, our efforts of taking our destiny in our own hands have paid off.

I am pleased to report that we continue to make significant strides. Last March, we started construction of the Lifelong Learning Center. This building is scheduled for completion around the High Holidays next year. After that, the revitalization of our 87th street building will begin.

We are so fortunate to have such strong support for this once-in-a-generation campaign. Thank you! We recognize that between the Kol Nidrei Appeal, which pays for our annual expenses, other appeals you get from the schools and other parts of the synagogue, and the Capital Campaign, we are asking a lot.

Our campaign has had two objectives. The first is to reach or exceed the dollar amount of the project. Our second goal is broad community participation so that the legacy we leave future generations truly rests on the shoulders of our entire community. We want each and every one of us to be able to share in the pride of this transformation. If you haven’t yet given, please make a gift of any size – just participate. Any funds raised above the expected cost of the project will be used to increase our endowment to maintain our space for future generations and provide support to handle unforeseen renovation costs.

Broad participation will build the bonds of our thriving community, allowing everyone to be part of our shared legacy. It will also make a statement about our vibrant Jewish community that will resonate for decades. We have all benefitted from the generosity of those who came before us and built our 36-year-old building. It is now our time to pick up the mantle of responsibility for the future. We are asking each of you to participate with a gift that is meaningful to you and your family. As Winston Churchill once said, “we make a living by what we get, but we make a life by what we give.”

Above all else, at Park Avenue Synagogue our focus remains on a culture of one-on-one connection, kindness and warmth that has been our hallmark for so long. We provide a welcoming entry to our community, we meet people where they are, and we assist them on their Jewish journey.

I believe that the best way to walk down life’s path is never to do it alone. As you think about your path, remember the importance of your family, the Jewish people, and this community. Think about the important moments and phases in your life: births, brit and baby naming celebrations, holidays, Jewish education for your children and yourselves, Bnei Mitzvah, weddings, community events, and sad times of death and mourning. Think about the relationships you develop here. There are many wonderful and kind people here to fill your journey with meaning and joy.

I strongly encourage you to be like Nachshon, take action, get involved in Park Avenue Synagogue, and create a path for yourself, your family, our community, the Jewish people, and for those that follow you.

Our dreams can only be realized with the support of our entire community. We cannot do this without you. We are a synagogue in action, building the future, uniquely positioned to address the needs of our community. I hope you will take an active part in it.

On behalf of the Officers and Board of Trustees of the Synagogue, we pray that all of our members and their families are written and sealed in the Book of Life and enjoy a life of peace and prosperity, health and happiness.

Click here to use our secure online donation form. 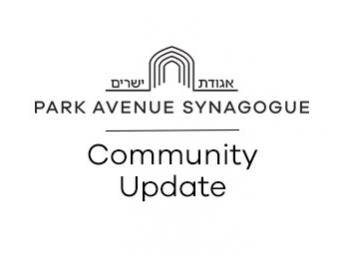 We want to update you on the approach Park Avenue Synagogue is currently taking to help ensure the health and well-being of our community. 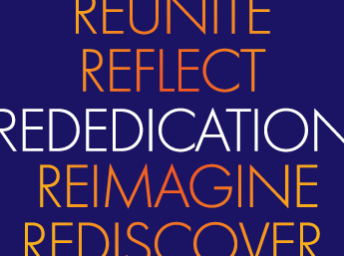 PAS made history on Sunday, December 8 with the Rededication of our 87th Street building – a once-in-a-generation event attended by more than 1,350 congregants, community faith leaders, and friends. 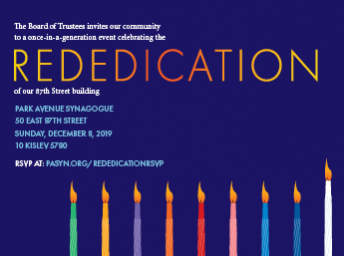 Just in time for Hanukkah, Park Avenue Synagogue officially opened its new and expanded campus on Manhattan’s Upper East Side.