When Generals Robert E. Lee and Ulysses S. Grant sat down together at Appomattox in April 1865, an exchange of their respective Seder plans was not high on their list of priorities. And yet, one hundred and fifty years since the end of the Civil War, it is altogether remarkable to realize that the surrender of the Confederate forces to the Union took place on the eve of the Jewish festival of freedom. On this Shabbat HaGadol, as we prepare for both our upcoming seders and the sesquicentennial observance of that historic day, it strikes me as an opportune time not only to consider the significance of April 1865 in our nation’s history, but also to reflect on how that historical pivot continues to shape the landscape of our country through this very day.

Although any schoolchild will tell you that 1776 was the year our nation was founded, 1865 was arguably the first opportunity for the ideals embedded in the Declaration of Independence to be given full expression.

“We hold these truths to be self-evident, that all men are created equal, that they are endowed by their Creator with certain unalienable Rights, that among these are Life, Liberty and the pursuit of Happiness.”

Familiar as we are with Jefferson’s words, we are also undoubtedly aware that Jefferson, Washington, Madison, and Monroe, among other Founding Fathers, were slaveholders. To be sure, Jefferson’s initial draft of the Declaration did contain a denunciation of slavery, a passage that was excised at the urging of delegates from South Carolina and Georgia. Nevertheless, be it Jefferson’s ownership of slaves, his reflections on Negro inferiority in his celebrated Notes on Virginia, or his reticence to address the issue of slavery head on, an honest assessment of our nation’s founding must at some point confront the moral paradox built into the establishment of our “almost-chosen” nation. As with so many leaders, past and present, Jefferson and his contemporaries kicked the can of this quandary down the road. In Jefferson’s own words, “It is to them I look, to the rising generations, and not to the one now in power for these great reformations.” (David Brion Davis, The Problem of Slavery in the Age of Emancipation, pp. 177-8)

The boiling point would come with the Civil War. By this telling, it would be the shots fired at Fort Sumter in 1861, and not the ones at Lexington in 1775 that served as the birth pangs of our nation.

“Four score and seven years ago our fathers brought forth on this continent, a new nation, conceived in Liberty, and dedicated to the proposition that all men are created equal.”

Ostensibly, Lincoln’s Gettysburg Address served to dedicate a cemetery and honor those felled in battle, but what Lincoln understood better than anyone was that his dedication was aimed not only to the memory of the fallen soldiers of Gettysburg, but to the vision of the Founding Fathers: “a government of the people, by the people, for the people.” Of course, even after the Emancipation Proclamation, it would take nearly eighteen months and thousands of American lives before the fighting would come to an end. The fight was hard fought. As Lincoln intoned in his second inaugural, both sides – the abolitionists and the apologists for slavery – “read the same Bible and pray[ed] to the same God,” dividing the nation not just by geography or interpretation of the Constitution, but by the interpretation of sacred scripture itself. Just over one month after his national call to “finish the work we are in,” just six days after the surrender of General Lee to Grant, on Shabbat, April 15, 1865, Lincoln would die by an assassin’s bullet, having seen, but not yet entered, the Promised Land. 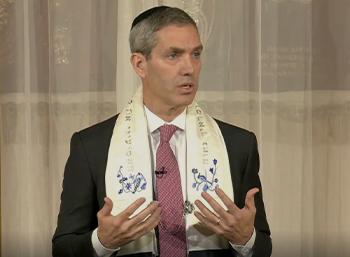