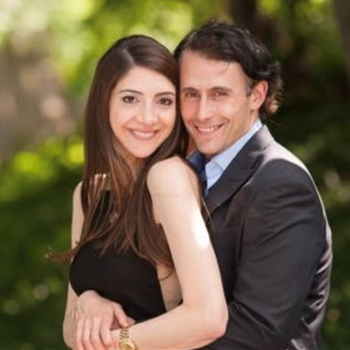 Stephanie and Elliot Berk are active members of Park Avenue Synagogue (PAS). They serve on the board of the Young Couples Group (YCG). As co-chair and president of the YCG board, Stephanie also serves on the PAS board and the Young Family Education (YFE) committee. Stephanie and Elliot’s roots in Jewish tradition started in their childhoods.

On Stephanie and Elliot’s first date, they talked about their grandmothers, Stephanie’s Bubby and Elliot’s Safta, and their families. Their love for their families and the importance of Judaism immediately bonded them. This thread continued as they joined PAS and attended the annual PAS New Member Reception. Everyone in the room could not have been more friendly, eager to get to know them, asking about their lives, and welcoming them with open arms. This warm reception inspired Stephanie and Elliot to focus their involvement at PAS upon bringing people together and giving them the same experience. Whether they are deep in discussion with friends and clergy at Study Circles, observing Sukkot with Holocaust survivors in the PAS roof sukkah, putting together toiletry bags for The Jewish Board charity on Mitzvah Day, dancing and singing with their children at a Kabbalat Shabbat, or hosting shabbat dinners for friends old and new, PAS is a huge part of their lives.

Stephanie and Elliot’s children have attended and will be attending nursery school at the Penn Family Early Childhood Center (ECC), which has been a wonderful formative experience, an atmosphere of Jewish tradition and identity, and a source of close friendships for parents and children alike. The leadership and teachers at the ECC have also provided inspiration and guidance for the Berks as active and involved parents.

Stephanie and Elliot met with Rabbi Elliot Cosgrove immediately before the birth of their first son, and the wisdom and insight offered then and thereafter by the PAS clergy has been invaluable upon embarking on the most important journey of their lives. Stephanie and Elliot want to thank the clergy, staff, PAS Board, and the entire PAS community.