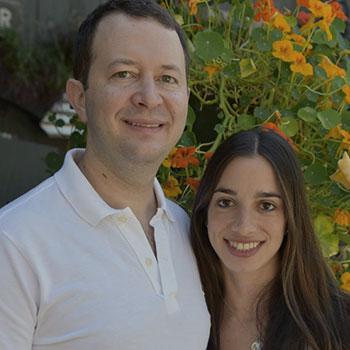 Raising children with Jewish values is an important goal for many parents. This was certainly the case for Dan and Nicky Shatz, who have been members of PAS since 2015. Seeing the synagogue’s wide array of programming for families, they knew they wanted to join before they had kids.

They first became active in the PAS community by attending Young Family Education (YFE) events and kids’ classes in 2016. From there, their involvement has grown to include the Young Couples Group (YCG) and Study Circles. Connecting with other couples in the community has been a highlight of their time here, allowing them to make many new friends over the years. They even became YCG chairs in 2018. Dan is also a leader of the Young Dads study group with Rabbi Witkovsky, an experience that has helped him to network with his peers while continuing to develop his connection to Judaism.

Dan and Nicky's daughter attends the Penn Family Early Childhood Center. Their son, who is currently in the Shalom Shtayim program, will join his sister at the ECC in the fall. The Shatzes are grateful for the opportunity to raise their children with a love of Judaism and its values.