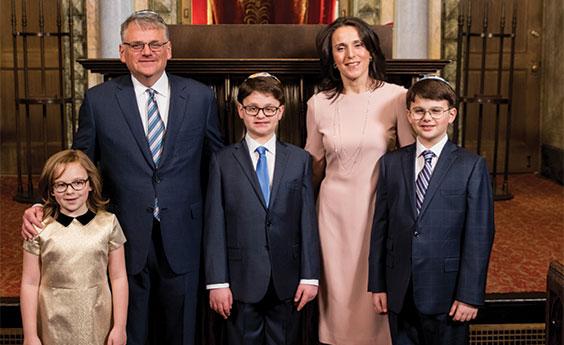 Lisa Grinberg came to Park Avenue Synagogue when she and her husband Alex were first dating, having been introduced to one another by a longtime friend, and longer-time member of the Park Avenue Synagogue community. It was a joy to be welcomed into this warm and established community, married by Rabbi Lincoln and Cantor Lefkowitz, and to celebrate so many simchas amidst friends and family. As Lisa and Alex started their own family, Lisa became involved at PAS in the ECC, in the adult education program, and volunteering in many ways, engaging fully as she and Alex cultivated their own ties to the PAS community.

Lisa grew up in Roslyn, NY, the daughter of Holocaust refugees who gave her a strong sense of Judaism as a culture, an ancient heritage of community, learning and celebration. But Lisa’s first formal Jewish study came when, as a junior at Wellesley, she spent a semester as an “exchange student” at JTS. A Jewish philosophy course with Professor Neil Gillman, z”l, was a life-changing experience. Professor Gillman welcomed every question, opening doors to thinking about God in ways that Lisa had not imagined. She spent the subsequent summer in Israel studying, working, and volunteer teaching. When she returned to Wellesley, she remained a psych major with a minor in education, but she became active leader in the campus Jewish community and began her lifelong engagement with creating the kind of Jewish community that she envisioned for herself, and now, for her children.

After Wellesley, Lisa earned an MBA at NYU and worked for 20 years in hospitality and entertainment, including as head of concessions for Loews Cineplex and Executive Vice President of marketing and product placement for New Line Cinemas. She left the private sector to work in the nonprofit world, focusing her skills in development and communications in the arts and education.

Given the decidedly nontraditional path of Lisa’s Jewish education, access to a Jewish community, Jewish education, Jewish identity, and family is one of her guiding principles. As an adult with young children, Lisa was committed to setting an example for them by celebrating a Bat Mitzvah. She participated in the adult bat mitzvah class with Cantor Nancy Abramson, and then Alex joined her as they undertook Melton studies. While Lisa was at minyan one morning – a requirement of the bat mitzvah class – Rabbi Cosgrove recruited her and a classmate to co-chair the PAS trip to Cuba. The spiritual experience of studying for and completing the bat mitzvah ceremony and the communal experience of chairing the Cuba trip opened the doors to many more avenues for participation. Lisa has served on the Congregational School Parent Association, the Mitzvah Day Committee, the Congregational School Committee, the Synagogue Advisory Board, and as a Trustee. In recent years Lisa was the founding chair of the PAS Inclusion Initiative.

Lisa and Alex have three children, who are the third generation of Grinbergs to worship and grow up at PAS. The younger two, Gideon and Lilliana, each attended the ECC, but there was no place there for oldest son Noah, who had significant delays as a toddler. As a family, the Grinbergs grappled with what it meant to be part of a community where they could not worship and study as a family. Lisa opened the conversation repeatedly, and thanks to her persistence and perseverance, doors began to open. Noah began his Jewish education in the Congregational School in Kindergarten with a “shadow,” and eventually, with the support of the Congregational School staff, he began attending independently. His successes at PAS emboldened Lisa and Alex to consider new academic environments and possibilities for him. What had been the greatest obstacles and challenges became the sweetest victories. When Noah celebrated his bar mitzvah last year, Rabbi Cosgrove remarked that he may have been the first Bar Mitzvah whose parents both celebrated their bnei mitzvah on the PAS bimah.

Lisa is a dedicated advocate for inclusion, accessibility, and education. For Lisa, a synagogue community is first and foremost a place that is accessible to all, where everyone feels welcome and encouraged to question, explore, participate, learn, worship, and contribute, without barriers. Lisa and Alex are grateful for all the wonders and joys they have been fortunate to experience. They are dedicated to sharing and enriching the lives of those around them, in all the communities in which they participate.