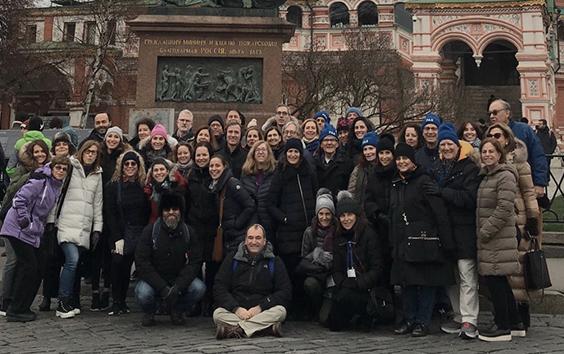 Traveling with PAS is always special, although rarely (if ever) does it include a congregant and co-chair living abroad at the trip’s destination. In November, I had the good fortune of welcoming 112 fellow congregants to St. Petersburg and Moscow for an eye-opening, community-building week that was also a whole lot of FUN. Many of our multi-generational group had family roots in Russia, and together, our personal connections told the story of Soviet Jewry.

As a child of the 80s, I symbolically shared my bat mitzvah with a Soviet “twin.” Almost 20 years later, I married an immigrant from Odessa who never planned to return to the FSU, but in 2015, we moved to Moscow for his job. Our kids were just over 2 and 4 and we had been actively engaged in the amazing PAS community. We didn’t know many people in Russia, certainly none who were involved in Jewish life. I soon realized that it is quite complex, but passion-filled, vibrant, and undeniably strong.

For a week in November, I was lucky to share what I’ve learned with the PAS travelers as well as to have experiences with them that I could not have had on my own. I co-chaired the trip with the stellar Judy Goodman and Alan Levine. Led by Rabbi Cosgrove and Rabbi Savenor, Cantor Brook and Beryl Chernov, we were awed by Catherine’s Palace in the snow, enjoyed special early entry to the Hermitage museum, and were impressed with the Kremlin Armory, Red Square, the Moscow Metro, and the Jewish Museum of Tolerance. But as with other wonderful PAS trips, the highlights were in special moments with the locals, when we bore witness to incredible stories of survival, bravery, and hope.

We met with the director of Yesod, a large, state-of-the-art community center which is a hub of Jewish life in St Petersburg boasting a kindergarten, a gym, art and music classes, a library, a singles group (with a matchmaker!) and consistent Shabbat and holiday meals. The director told us their mission isn’t about rebirth, since that happened 30 years ago, but about growing the community and supporting them with the tools they need to continue their Jewish life.

We spent Shabbat at Moscow Choral Synagogue, sitting where Golda Meir sat in 1948 as the first representative from Israel to the Soviet Union. It was the first time in Choral’s history that a Conservative Synagogue had shared a Shabbat with them! Chief Rabbi Pinchas Goldschmidt led prayers along with a beautiful choir. At dinner we heard poignant stories, . At dinner, we heard poignant stories including from our Russian-born guide, who brought in the kippah given to her late father by Golda Meir at his bar mitzvah at Choral. She had immigrated to Israel as a young girl and had never returned to Choral until that very night with us.

We concluded Shabbat with an informal teatime, hosting over 40 Muscovites ranging from the heads of Hillel, JAFI, and Limmud to students and business leaders who are active in everyday Jewish life. During our small group conversations, we bonded over our shared commitment to Jewish identity. . It was incredibly uplifting to see firsthand Russian Jews openly celebrating being Jewish.

The PAS travelers will agree that our most fun evening was taking a Moscow Boat Cruise, tasting caviar and vodka, enjoying the beautiful city all lit up, and dancing until midnight with a fantastic DJ. Make sure to ask someone to show you a video of Rabbi Savenor and Beryl dancing!